A rare nice part of the trail, wide and flat…

During a nice stretch of flat path I was thinking about the perfect man. Forget flowers and chocolate, smiles, Champaign and even sex. For me, the perfect man (on that night) would be the one that would give me a bath, carry me to bed, massage me all over, feed me pizza, brush my teeth for me, bring me a painkiller and let me sleep 24 hours. That is why it is so hard to find the perfect man, depending on how you feel or what you do he has to be a completely different person!
Then came the dark. We found this nice fire truck track, large, flat, reasonably dry and short. There was only 1.5 km to go and we thought we would make it in 15 min, but soon after we thought it the bush trail was back with all the ups and downs and the night. Fortunately two of the girls had brought their walking lights. If you told me I would have to walk in the middle of the bush at night with just too little lights and four other girls a week ago, I would have told you in a charming phrase: NO F%$#$@$@$%$# WAY! 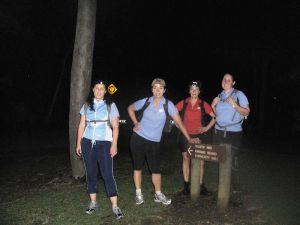 Finish Line in the Dark

When it happened I didn’t even feel scared. So tired… so much pain in my knees and legs… there was no space for fear, except when we thought the dogs were coming. We saw the fabled lights at the end of the trail. It was a house from where we heard some mean dogs barking, they sounded like Rottweilers. A minute after something moved in the bushes. We thought the dogs were out and coming to get us. I’m glad to say it was probably some wallaby or something that was running away from us, not toward us.
And just then we found civilization!!! We still had to walk another four blocks to the car. Then smelly bliss…
– I can smell myself!
It was a disgusting smell. An overpowering mixture of sweat, mud, urine and all those bodily smells you get after too much exercise. My own smell was so strong I couldn’t even feel the others so I hoped their own smells were overpowering them so they could not smell mine.
We rode in silence, a blissful, tired, happy, silence. We did it, it seemed to say. We felt brave, powerful, determined and happy. But I felt happier then them… I am sooooo happy I’m not doing the 100km !

The dayssss after were pure hell. I could barely walk, although I had energy I had to walk with bent knees. The first day after I was walking like a mammoth, dragging my feet. Used the lifts with all the old ladies, but had to climb stairs in Redfern.
It was an “ouch” per step with me using the handrails as lifelines – without them I wouldn’t have done it.
The second day after was still made of pain, the knees felt a bit better but the muscles… oh my God! It was the old penguin day walking… old and decrepit penguin walk.
On the third day after I had been converted to a new and young penguin. But a penguin none the less.
Only on Friday I was truly recovered. About nature all I can think is: f@#@$ nature I don’t wanna see any for a long long long time!

Walking in heavy rain is like being part of a tribe.
There’s an instant connection to anyone else braving the elements, holding the umbrella for fear of going Poppins with the wind, a daring to the hurricane to Dorothy you.